Diana Alamisi, a resident of Kumasi, has won a fully expense-paid trip to watch the 2022 World Cup after participating in the “Storm Puma Awake” World Cup raffle promotion.

Alamisi becomes the first winner to bag a ticket to watch the World Cup in the first monthly draw held at the Breman Hall of the National Lottery Authority (NLA), Accra.

The raffle, held as part of a campaign to garner support for the Black Stars ahead of the 2022 World Cup, also witnessed other winners in the instant weekly promo, who were presented with prizes including sound systems, refrigerators, flat-screen televisions, and microwaves.

Speaking at the raffle draw, Madam Linda Aidoo, Brands Manager at Kasapreko Company Limited, congratulated all winners of the World Cup raffle draw promo and urged others to continue trying their luck as they could emerge winners in subsequent raffles.
She stated that with the 2022 World Cup fast approaching, it was imperative to whip up enthusiasm among football fans with this customer loyalty promotion. 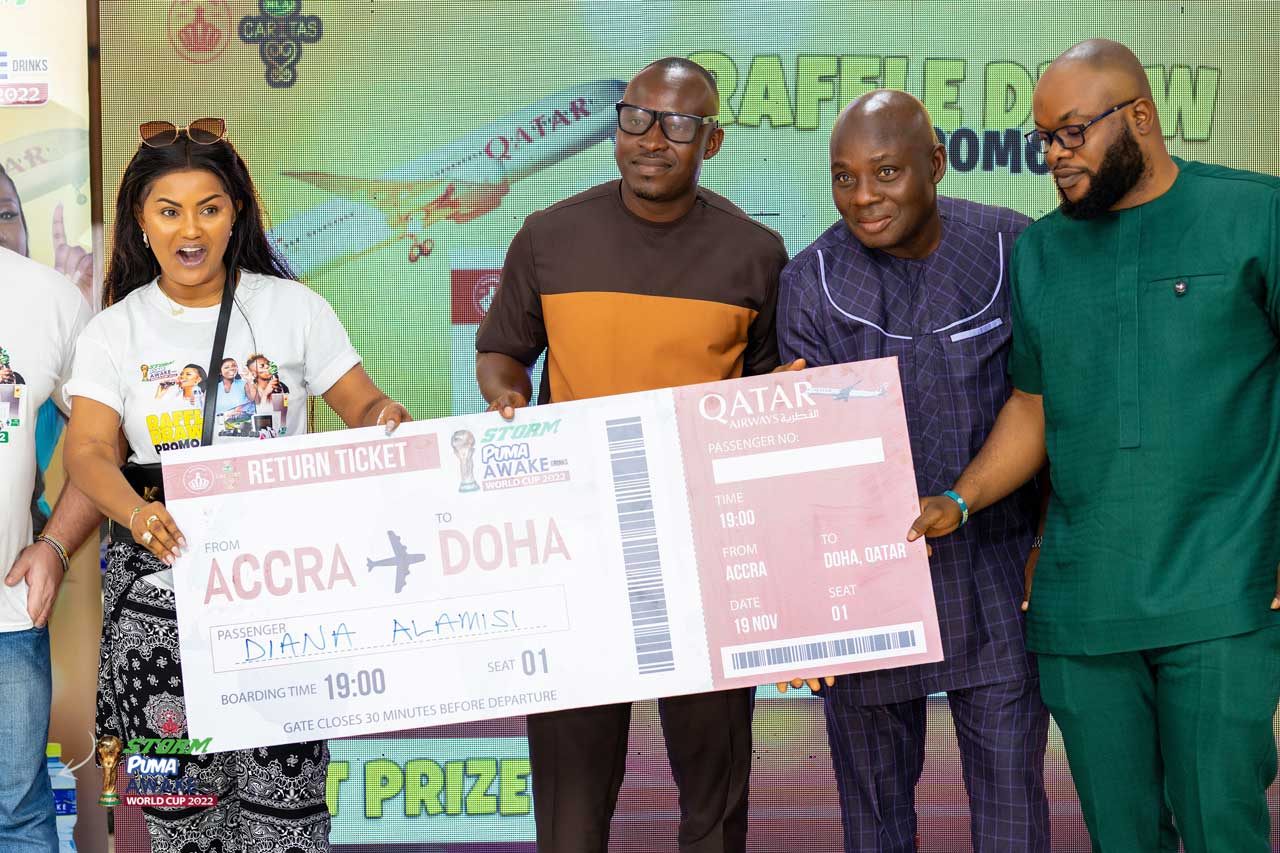 “On behalf of the management of Kasapreko, we appreciate every customer who have taken part in the promo. The major objective of the campaign is to rally support for the Black Stars as they participate in the World Cup.

“We have consistently led the beverage industry with our unique products such as Awake Purified Drinking Water and also rewarded our loyal customers who have also stuck by us,” she said.

Madam Nancy Darko of NLA’s Caritas Lottery Platform, reading a speech on behalf of Mr. Samuel Awuku, Director General of NLA said they were thrilled to be part of this life-changing opportunity for consumers of Storm, Awake, and Puma products.

“The Caritas Lottery platform enables well-meaning organisations and Ghanaians who wish to conduct lottery activities the opportunity to help the needy in society and also reward their loyal customers.

“With NLA being the regulator, we ensure that all promotions run by these corporate bodies on the Caritas Platform are transparent, authentic, and devoid of rigging or other malpractices that can mar the fairness and objectivity of the process,” she said.

The draw launched by Kasapreko Company Limited runs now until the end of October 2022 , with two more winners to be selected for the all-expenses-paid trip to the Qatar World Cup.

Consumers who are interested in participating in the draw can text their unique code found on the Awake, Storm, and Puma Drinks bottle to *780# option 2 to be eligible for the draw.

The activation trail for the Storm Puma Awake World Cup raffle across Ghana will kick off at the forecourt of the Accra Mall on Friday, September 2, 2022, with numerous prizes to be won by customers.

Kasapreko Company Limited, established in 1989 by Dr. Kwabena Adjei, provides quality drinks at an affordable price to consumers and remains a pride of Ghana.

Hit enter to search or ESC to close